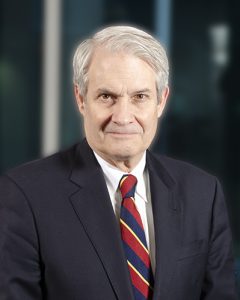 Thomas B. Griffith recently retired from the United States Court of Appeals for the D.C. Circuit to which he was appointed by President George W. Bush in 2005. He is currently a lecturer on law at Harvard Law School, Special Counsel at the international law firm Hunton Andrews Kurth, and a senior adviser at the National Institute for Civil Discourse. A graduate of Brigham Young University and the University of Virginia School of Law, Judge Griffith was a partner in a law firm in Washington, D.C. before he was appointed Senate Legal Counsel, the nonpartisan chief legal officer of the United States Senate. Later he served as General Counsel at BYU. Judge Griffith is a member of the Advisory Boards of the Neal A. Maxwell Institute for Religious Scholarship at BYU and the Center for Constitutional Studies at Utah Valley University. In 2021, President Joe Biden appointed Judge Griffith to the Presidential Commission on the Supreme Court of the United States. He co-authored Lost, Not Stolen: The Conservative Case that Trump Lost and Biden Won the 2020 Presidential Election along with Michael Luttig and Michael McConnell former federal judges also appointed by Republican presidents