Most students arriving to study at BYU Law School don’t have 10 years of legal experience already behind them. But when Samuel Morales arrived in Provo last fall, he did.

Samuel, who recently completed an LL.M. in Comparative Law, is from Mexico City, where he practiced law for the last 10 years with the hope of one day coming to BYU Law School.

Growing up, Samuel had experiences that demonstrated to him the importance of religious freedom and tolerance. As a child, he was bullied for his religious beliefs at school. Then, as a young adult, he had the opportunity to freely share his beliefs with others while serving as a missionary in the Mexico Chihuahua Mission for The Church of Jesus Christ of Latter-day Saints.

After returning from his mission, Samuel became involved with the J. Reuben Clark Law Society (JRCLS) while studying law in Mexico City. It was through his association with the JRCLS, he said, that he first learned about principles of religious freedom. He realized he could help prevent his own children—and others—from experiencing the persecution he did as a child. “[That’s] when I first learned that we, as attorneys, have the opportunity to help with our legal skills, to help promote and defend religious freedom,” he said. 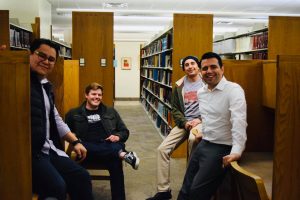 Samuel enjoys some time to talk with friends in the BYU Law Library.

Even with 10 years of practice as a lawyer, Samuel said the experience was like learning “a completely different language.”

“The legal language here in the U.S. is a completely different experience. It’s like learning a third language,” he said. “Here they teach you how to think from a legal perspective—from different perspectives.”

Samuel remembers Professor Denise Farnsworth telling her students she wanted to help them learn how to think like “technicolor lawyers.”

“To take an issue and break it into pieces and see it from different perspectives—that’s really helpful,” Samuel said. “I will definitely be doing that when I get back and practice law again in Mexico.”

Despite being older and more experienced than many of his classmates, Samuel said he regards the BYU Law community as a family. “When I came here, I was really humbled to be part of this law school community,” he said. “[Your classmates] help you and they love you beyond the walls of [the] building,” he said. 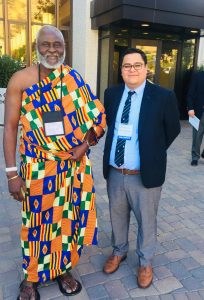 During his one-year LL.M. program, Samuel has actively participated with the Center. Last fall, he volunteered during the annual Law and Religion Symposium. Part of his responsibilities included assisting the delegates. One of the delegates, His Majesty Nii Okwei Kinka Dowuona VI, made a big impression on Samuel because of the humility he showed in his interactions with Samuel. “That’s something that made me grow as a person,” he said. For a king to “be that humble and be willing to receive instruction from a law student—that’s something really meaningful…”

Samuel also had the opportunity to work with ICLRS Assistant Director David Moore. They traveled to Columbia for the Latin America Consortium Annual Colloquium, where Samuel learned more about Latin American social issues. “I thought I was well acquainted with all the legal culture in Latin America,” he said. However, he found there was much to learn from those he met at the colloquium. “I was just impressed about how they get involved, how they study, how they approach the law from a different perspective.”

While the legal experience of the LL.M. program has been demanding and instructive— “I’ve never been so stressed before in my life,” he said—Samuel has learned many other lessons during his experience.

“The nature of the program also helps you see your classmates as your teammates, not as your competitor[s],” he said. “It’s not only learning the law. It’s about being more humble, being more willing to serve.”