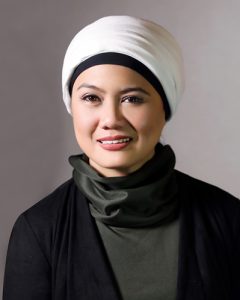 Chair, Ako Bakwit
Samira Gutoc has worked for more than 20 years as a journalist, speaker, consultant, environmentalist, trainer, women’s IDP rights and peace advocate, civil society leader, and former legislator in the Autonomous Region in Muslim Mindanao (ARMM). She was a key speaker and lobbyist in pushing policies on Gender and Development (GAD), Women in Peace and Security (LNAP), Women in the Army and PNP. Currently, she highlights the value of women IDP organizers and leaders as well as protection of widows and orphans. She has chaired the anti-crime-watch movement Kazalimbago Movement since 2016. She is the spokesperson of Ranao Rescue Team; to highlight the evacuees’ situation, their rights, and humanitarian situation, she has been a resource person to the Wall Street Journal, Washington Post, and New York Times and has also appeared on Al Jazeerah. She is a former member of the Bangsamoro Transition Commission which drafted the Bangsamoro Basic Law and is a former director of Amanah Islamic Bank. In the previous administration, she was appointed as Organization of Islamic Cooperation sectoral representative for women in the ARMM Legislative Assembly. She also served as member of the Philippine Army (PA) multi-sectoral advisory board. In February 2020, she cofounded Ako Bakwit, Inc., a rights organization that aims to promote and protect the rights and welfare of the internally displaced people in the Philippines. She obtained degrees in communication and international studies at the University of the Philippines Diliman. She completed her law degree at the Arellano School of Law and was awarded a fellowship at the Oxford Center for Islamic studies. Gutoc is married to vice engineer Abdul Maomit Tomawis and has a three-year-old son.