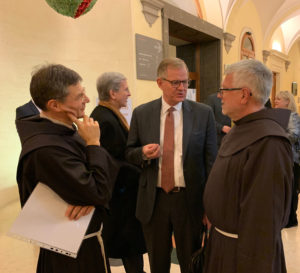 The highly successful conference “Religious Voices, Human Dignity, and the Making of Modern Human Rights Law” was held 20-22 January 2019 at La Pontificia Università Antonianum in Rome. This conference was the first of the year 2019 to follow upon a major international initiative undertaken by ICLRS and global partners during 2018 to commemorate the 70th anniversary of the Universal Declaration of Human Rights, and to move forward the work begun by the UDHR in 1948 to secure Human Dignity for everyone, everywhere.

The Rome conference was organized by the Pontificia Università Antonianum in cooperation with the International Center for Law and Religion Studies (ICLRS) at Brigham Young University; the Oxford Journal of Law and Religion; the Religion, Law and International Relations Programme of the Oxford Centre for Christianity and Culture at Regent’s Park College, Oxford; and the Oxford Society of Law and Religion. Those attending the Rome conference were addressed by faculty of the host university, including the Dean of the Faculty of Theology, Guiseppe Buffon, and by representatives of the cooperating sponsors, including Professors Brett Scharffs and Cole Durham, Director and Founding Director of ICLRS; Kristina Arriaga, President of the Oxford Society of Law and Religion, and Dr, Peter Petkoff, Director of Religion, Law and International Relations Programme, Regent’s Park College, Oxford.

Religious leaders addressing the group included Monsignor David-Maria A. Jaeger, Prelate Auditor of the Roman Rota; Elder Gary E. Stevenson of the Quorum of the Twelve Apostles of The Church of Jesus Christ of Latter-day Saints; and Khalid Hajji, Secretary General, European Council of Moroccan Ulemas. Political leaders speaking included Ján Figel’,  European Commission Special Envoy for Promotion of Freedom of Religion or Belief outside the European Union and Anna Záborská, Member of the European Parliament.

Among topics addressed were “The Road to the Universal Declaration of Human Rights”, “From the UDHR to the ECHR and Dignitatis Humanae“,  Religious Voices, Human Dignity, and Sustainable Development”, “The Changing Landscape of Religious Freedom Protection”, “Intercultural and Anthropological Perspectives on Religious Freedom”, and “Emerging Trends in International Human Rights Protection:  Renewing Commitment to Human Dignity.”