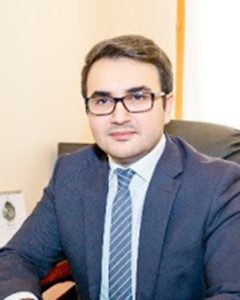 Executive Director, Baku International Multiculturalism Centre
Ravan Hasanov received a bachelor’s degree from the Faculty of Law of Baku State University, graduating with honors. He received a master’s degree in law from the University of Potsdam in Germany and successfully completed the Department of Criminal Law, Criminal Procedure, and Criminology program. On February 16, 2018, he defended his dissertation for PhD at the Institute of Law and Human Rights at Azerbaijan National Academy of Science, specializing in penal enforcement law. From March 2016 to April 2017 he worked as a senior specialist for the State Advisory Service of the President of the Republic of Azerbaijan on International, Multicultural and Religious Affairs, and from April to July 2017 he was a counselor. By the order of President Ilham Aliyev, in February 2019 Hasanov was appointed as Executive Director of the Baku International Multiculturalism Centre.