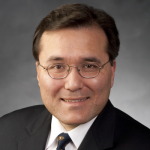 Dr. Paul E. Kerry joined the Center in 2019 as an Associate Director. Professor Kerry is an associate professor in the department of History at Brigham Young University, a member of the European Studies faculty, and a former associate dean of Undergraduate Education. Dr. Kerry has for many years aided and supported the work of the Center in conferences and programs held in Oxford. For the past several years Dr. Kerry has lived in the United Kingdom, where was a supernumerary research and teaching fellow at the University of Oxford’s Rothermere American Institute, co-convener of the RAI’s research seminar on Constitutional Thought and History, and co-convener of the Oxford History Faculty’s research seminar in Historiography at Christ Church, participating in the Voltaire Foundation’s Enlightenment Workshop, and collaborating with the Faculty of Theology and Religion’s Centre for Theology and Modern European Thought.

He supports the humanitarian work of the AMAR international charitable foundation in its peace-building projects such as the provision of healthcare for refugees and IDPs in the Middle East and its education initiatives. The charity strengthens civil society through the delivery of courses on human rights, the rule of law, and citizenship to women and others, and works to end discrimination and violence against minorities and promoting tolerance between religious groups by engaging key stakeholders in training and community projects.

Dr. Kerry researches in German and European intellectual history, transatlantic transmission of ideas, and historiography. He has cooperated with the Programme for the Foundations of Law and Constitutional Government on topics relating to international freedom of religion or belief and ethics in public Service and is currently researching Amendment I to the United States Constitution in relation to the philosophical presuppositions of its European antecedents. He is on the editorial board of Religion in the Age of Enlightenment, the advisory boards of Carlyle Studies Annual and Fairleigh Dickinson University Press, and the editorial committee of the Strouse Edition of Carlyle’s works published by the University of California Press. He has served as editor for volumes on Schiller, Goethe, Carlyle, Mozart, and Franklin. He wrote a book on Enlightenment thought and Goethe and is completing another monograph on German intellectual history. He has been awarded fellowships at Princeton, Cambridge, Edinburgh, and Oxford, where he took his doctorate and was a member of St. John’s College. He is a Fellow of the Royal Historical Society.