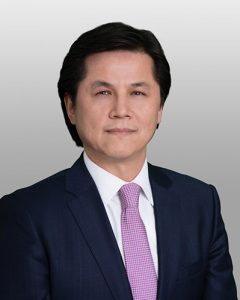 Senior Fellow, Hudson Institute; Chair, US. Commission on International Religious Freedom
Nury Turkel is the first U.S.-educated Uyghur-American lawyer, foreign policy expert, and human rights advocate. He was born in a re-education camp at the height of China’s Cultural Revolution, spent the first months of his life in detention with his mother, came to the United States in 1995 as a student, and was later granted asylum by the U.S. government. In May 2022, Turkel was reappointed to the U.S. Commission on International Religious Freedom and currently serves as its chair. He is a senior fellow at the Hudson Institute and a member of the Council on Foreign Relations. Turkel is a respected opinion leader and foreign policy expert focusing primarily on diplomatic, economic, and national security issues involving China, Central Asia, and Turkey. He is also a practicing attorney and has advocated for human rights for more than two decades. He serves as chairman of the board for the Uyghur Human Rights Project (UHRP), which he cofounded in 2003. He has assisted Uyghur refugees in the United States, Europe, and Turkey, including successfully representing a number of Uyghur political refugees with their U.S. asylum applications. In 2020, Turkel was named one of Time magazine’s 100 Most Influential People in the World. In 2021, Fortune named him one of the World’s 50 Greatest Leaders, and he received the first Notre Dame Prize for Religious Liberty from Notre Dame Law School’s Religious Liberty Initiative. Turkel has published policy-oriented commentaries and op-eds in publications such as Foreign Affairs, The Wall Street Journal, The New York Times, Time, Newsweek, and The Independent. He has spoken at numerous policy forums, academic institutes, and human rights conferences and has appeared on major media outlets around the world. Turkel has testified before the U.S. Congress about Uyghur internment camps and has advocated a legislative response to China’s atrocities. Many of his recommendations have been incorporated into U.S. laws and pending bills, including the Uyghur Human Rights Policy Act of 2020 (Public Law 116-145).