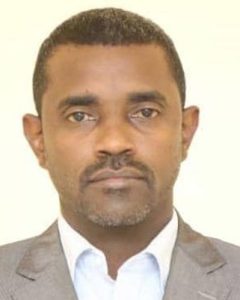 Former Minister of Religious Affairs and Awqaf
NasrEldeen Mofarih Ahmed Mohammed received his bachelor’s degree in Islamic studies at Imam Mahdi University and was an Islamic preacher at the Ummah Mosque from 2002 to 2019. He is a religious, political, and human rights activist who volunteers in civil society organizations. He has held many leadership positions such as Minister of Religious Affairs and awqaf; chairman of the board of trustees of the Diwan of Islamic Endowments, chairman for Student Welfare, chairman of the board of trustees of the Supreme Council for Islamic Call, chairman of Hajj and Umrah, general supervisor of the Islamic Fiqh Academy, and director of the Moderation Center for Combating Violent Extremism. He has also taken many specialized courses in the following topics: preparing advocates for peace building and diversity; advocating religious tolerance and renunciation of violence; qualifying imams and preachers from the Association for the Conversation of the Universe to Teach the Noble Qur’an and Islamic Sciences; building social peace in the postwar era from the International Strategic Initiatives Network; conflict transformation and peacebuilding in the postwar era; childhood information management system course, monitoring, and follow-up from the Child Welfare Council, White Nile State, in cooperation with UNICEF.