Miranda Cherkas Sherrill “never wanted to be a lawyer.”

At age 16, she was involved in a car accident, and two years later, she was sued. Her interaction with lawyers and the justice system did not leave a good impression.

“I thought that lawyers were just out to get you,” she said.

Miranda was set on going into politics and policy. But things changed when her parents took custody of four of her cousins.

“I went from being an only child to being one of five girls pretty much overnight,” she said.

As Miranda learned about the foster care experiences of her new sisters, she became determined to help them.

“I didn’t want to do something that would just put a Band-Aid on their sorrows but would really fundamentally change the problems that they had and make it so that no one would have to go through those things again,” she said. “That’s when I realized, you know, if I was a lawyer, then that would mean I can make real change for them.”

So, despite initial resistance, Miranda decided to attend law school. During her first week, she learned about the International Center for Law and Religion Studies and immediately knew she wanted to be involved. 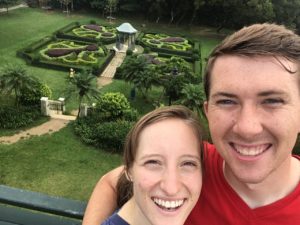 During her summer after her first year of law school, Miranda had a legal externship in Hong Kong.

“Hong Kong was so much fun,” she said. “I got to learn so much, not only about another country and its culture but also about the Church [of Jesus Christ of Latter-day Saints] and the way that [it] operates worldwide,” she said.

As part of her externship, Miranda drafted rental property agreements and charter agreements. She also learned about the legal background work required to engage in humanitarian efforts.

Miranda continued her involvement with the Center by serving on the management board, which has allowed her to assist in several research projects. Her favorite projects involved editing articles by scholars whose first language is not English. Much of her work has allowed her to learn more about the state of religious freedom in Ukraine and Eastern Europe after the Russian-Ukrainian conflict. She joked, “I never expected to learn anything about that, but now I’m pretty much an expert!”

Through her involvement with the Center, Miranda has been able to work with ICLRS Associate Director Elizabeth Clark. “[Professor Clark is] always so encouraging and supportive of not only all our students but also of me in particular as I’ve told her what I’ve been interested in doing,” Miranda said.

With law school complete, Miranda looks forward to what’s next. On her agenda: clerkships in Georgia and Idaho—but first having a baby this summer.