General Secretary, Commission of the Bishop’s Conferences of the European Union 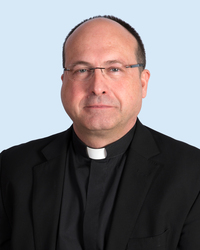 Born in Madrid in 1962, Rev. Fr. Manuel Barrios Prieto spent his childhood and youth in Rome studying in an English school. After attending the Pontifical Major Roman Seminary, he was ordained priest in the Basilica of San Giovanni in Laterano in 1988. He studied philosophy and theology at the Pontifical Gregorian University, obtaining the title of Doctor of Theology in 1998, and graduated in psychology at a Spanish state university. He is recognised European psychologist specialised in psychotherapy by the European Federation of Psychologists’ Associations (EFPA). Since 2011 he has been Director of the Secretariat for Ecumenism and Interreligious Dialogue of the Spanish Episcopal Conference and for twenty years he has been priest at the parish of Santa Catalina de Alejandría in Madrid. Previously, he was Episcopal Delegate for Family Pastoral Care in the Archdiocese of Madrid (2002-2011), Archpriest of the deanery of Barajas (2003-2012) and Professor of Theology at the Religious Sciences Institutes of San Agustín (2000-2011) and San Dámaso (2001-2010).