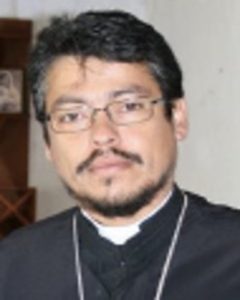 Bishop, Greek Orthodox Church
H.E. Louis Antonio Torres Esquivel received his bachelor’s degree in theology from Aristotle University of Thessaloniki in 2010 and specialized in the Hellenic language (coine). He was ordained a deacon and later a priest in the Basilica of Santa Sofía, City of Thessaloniki, Greece. He was elevated to the dignity of Archimandrite, Monk of the Most Holy Monastery of Kotlumusiou in Mount Athos. In 2020, he was elected bishop by the Holy Synod of the Ecumenical Patriarchate of Constantinople. He was also ordained as bishop in the Orthodox Cathedral of the Dormition of the Virgin in Bogotá, Colombia. In the development of Esquivel’s ministry, he has been assigned to the diaconal ministry as parish priest and rector of the Greek Orthodox Cathedral of Santa Sofía; chancellor of the Holy Greek Orthodox Archbishopric of Mexico, Exarchate of the Ecumenical Patriarchate of Constantinople for Central America, Caribbean Islands, Colombia, and Venezuela; vicar archbishop for Cuba and the Caribbean; spiritual director of the Feminine Monastery of San Efraim el Sirio in Kontariotiza, Piereas States, Olympus, Greece; director of the Translation Department; archbishop’s Vicar of Colombia; and bishop of Colombia and Venezuela.