Law and Religious Communities in Africa: Facilitating Freedom of Religion and Belief for a United and Strong Africa 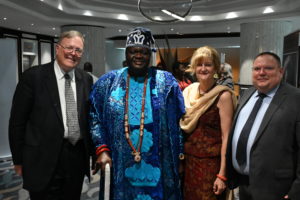 In cooperation with the South African Commission for the Promotion and Protection of the Rights of Cultural, Religious, and Linguistic Communities (CRL Commission); the African Consortium for Law and Religion Studies (ACLARS); and the West African Consortium for Law and Religion Studies (WARCLARS), the Center organized an Africa-wide conference on “Law and Religious Communities in Africa” in Durban, South Africa, January 19-22, 2020. The conference focused on registration laws for religious communities, which can be used by governments to restrict religious communities. Academic, religious, government and civil society leaders from roughly 18 African nations attended the conference and discussed how registration laws should facilitate religious freedom. Conference participants also visited a Hindu temple and received a VIP tour of the soon-to-be-dedicated Durban Temple of The Church of Jesus Christ of Latter-day Saints. Professor W. Cole Durham, Jr. led the organizing committee for the conference, and he, Professor Brett G. Scharffs and Professor David Moore spoke at the conference.