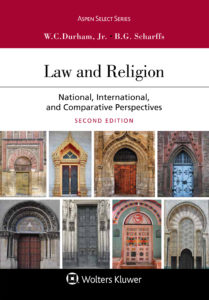 The International Center for Law and Religion Studies and Wolters Kluwer Legal Education are pleased to announce the publication of the second edition of the casebook Law and Religion: National, International, and Comparative Perspectives , as a title in the Aspen Select Series. This field-creating work was co-authored by ICLRS Director Brett G. Scharffs and Founding Director W. Cole Durham, Jr., with contributions from others at the Center, and published in 2009. The second edition has been extensively revised and updated, with the research assistance of students who have studied the text in class, and with extensive ediorial assistance from Michael Worley, and especially Center Publications Director, Donlu Thayer.

Originally developed for use in English-speaking law-school courses worldwide, the first edition of this field-creating work has now been translated into Chinese, Vietnamese, and Turkish, for use in training sessions for lawyers and academics in China, Vietnam, and Turkey, and translation of the second edition into Burmese, Indonesian, and Russian is now underway, with plans for Spanish, Hebrew, and Greek.

The casebook is a dynamic combination of international and domestic materials, designed to stimulate discussion of familiar and sensitive issues of conflict and debate in a global context. This unique work offers a new paradigm for studying law and religion in response to the forces of globalization and an increased international focus on religion. Combined with the groundbreaking work of the European Court of Human Rights and the work on religious freedom issues being done by other courts worldwide, these factors produce conditions that shed a new light upon many of the distinctive features of the U.S. legal system.

To deal with such an extensive and dynamic subject matter, the authors and editor of the Casebook have produced a Web Supplement containing resources impossible to include in the single volume, as well as teaching modules and “country threads” giving national, cultural, and language-specific perspectives.