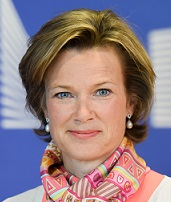 Katharina von Schnurbein was appointed the first European Commission Coordinator on combating antisemitism and fostering Jewish life in December 2015. Her mandate includes liaising closely with the Jewish community on behalf of the European Commission, proposing and implementing EC policy to prevent and fight antisemitism.

Prior, she worked for five years as advisor to European Commission President José Manuel Barroso on the dialogue with churches, religions and non-confessional organisations. Katharina started working for the Commission in 2002, serving as press officer for the EU Delegation in Prague. With enlargement in 2004, she moved to Brussels as spokesperson on employment, social affairs and equal opportunities for the Czech EU Commissioner Vladimir Špidla.

Prior to the Commission, Katharina worked for the Chairman of the European Affairs Committee at the German Bundestag in Berlin (2000-2002) as well as for an international crisis management consultancy. Her educational background includes undergraduate studies of Political Science and Slavonic Studies at Charles University in Prague and the University of Bonn, a Master of Slavonic Studies from Oxford University (1997) and a Master of European Studies from the Center for European Integration Studies in Bonn (1999).

She spent the academic year 2017/18 as EU Fellow at the European University Institute in Florence researching measures to combat antisemitism across Europe. Katharina received the B’nai B’rith Europe’s Human Rights Prize in April 2018. Katharina is married and has four children. She speaks German, English, French, Dutch, and Czech.