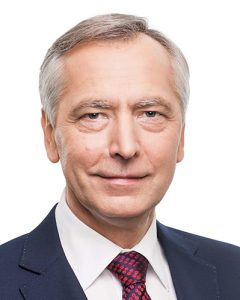 Former European Union FoRB Special Envoy; Member of the IRF Summit Global Leadership Council; Member of the IRFBA International Council of Experts
Ján Figeľ is former EU commissioner (2004–2009) and deputy prime minister of Slovakia (2010–2012). Prior to these positions he successfully acted as chief negotiator for Accession of Slovakia to the EU and state secretary at the Ministry of Foreign Affairs. Later, he served four years as a vice president of the Slovak Parliament (2012–2016). From 2016–2019 he was the first ever special envoy for the promotion of freedom of religion or belief (FoRB) outside the EU. This successful pioneering role was adopted by several EU countries that have established similar diplomatic positions since 2016. Figeľ has been strongly involved in FoRB advocacy, promotion of interreligious dialogue, religious literacy, and religious social responsibility. He was active in release of FoRB prisoners in Cuba, Iran, Pakistan, and Sudan. Under his guidance the European Institute of Innovation and Technology (EIT) was founded in 2008 as an EU body. Figeľ supports and promotes the “culture of human dignity.” As he points out, there is a nexus between human dignity and FoRB. With a group of experts and scholars he initiated the Punta del Este Declaration on Human Dignity for Everyone Everywhere with growing number of signatories (www.dignityforeveryone.org).