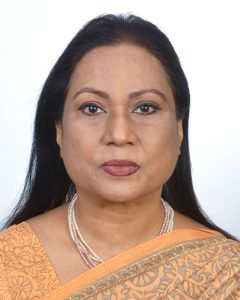 Ambassador, Permanent Observer Mission of the Organization of Islamic Cooperation to the European Union
Ambassador Ismat Jahan, a career diplomat from Bangladesh, is presently serving as the permanent observer of the Organization of Islamic Cooperation (OIC) to the European Union in Brussels. Prior to this position, she was her country’s ambassador to Belgium and the European Union. She served as permanent representative to the UN in New York City (2007-2009), concurrently accredited as ambassador to Peru and Chile and as ambassador to the Netherlands (2005–2007) with concurrent accreditation to Bosnia-Herzegovina, Croatia, and Poland. Earlier in her career she was deputy head of mission in Geneva and New Delhi. Specialized in multilateral diplomacy with focus on human rights, she has particular interest in issues concerning women’s rights. She served on the UN Committee on Elimination of Discrimination against Women (CEDAW, 2011-2018). Jahan holds a master’s degree in economics from the University of Dhaka and a master’s degree from the Fletcher School of Law and Diplomacy at Tufts University in Boston, Massachusetts.