Inter-American Forum of Collaboration and Interfaith Dialogue on Religious Freedom 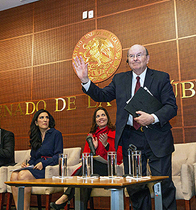 Professor Gary Doxey, Associate Director of the International Center for Law and Religion Studies, participated in the Center co-sposored conference “Inter-American Forum of Collaboration and Interfaith Dialogue on Religious Freedom,” held in the Mexican Senate in Mexico City on February 15, 2019. Given the historically strict interpretation of separation of church and state in Mexican law, this event was striking to many in attendance. Some remarked that the forum was historic, perhaps unique, in that it included addresses by major religious leaders at an event in an iconic government building to an audience that included high-level government leaders.

Professor Doxey spoke on “Religious Freedom, Human Dignity, and Current Inter-American Challenges.” Keynote addresses were given by Elder Quentin L. Cook of the Quorum of the Twelve Apostles of The Church of Jesus Christ of Latter-day Saints and Archbishop Rogelio Carera Lopez, current president of the Mexican Conference of Catholic Bishops, along with several other prominent government and religious leaders from Mexico and other Latin American countries. Others participating included the Russian Orthodox archbishop for Mexico, two bishops from the African Methodist Episcopal Church, a host of protestant pastors, and the following General Authorities from The Church of Jesus Christ of Latter-day Saints: Elder L. Whitney Clayton of the Presidency of the Seventy, Bishop Christopher Waddell of the Presiding Bishopric, and the entire Presidency of the Mexico Area.

Religious freedom is a topic of growing interest in Mexican public life. Many positive comments and press resulted from the conference, and it was mentioned at length in this article in the Church News: