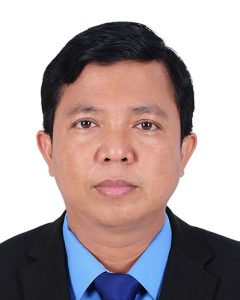 Deputy Governor of Kampong Cham
Sopheak Srey was appointed as vice governor of Kampong Cham province, Cambodia, in August 2022. He has held several senior positions in the Ministry of Cults and Religions’ provincial department in Kampong Cham including administrative management officer (2004), Chief Officer of Religious Education (2007), and department director from 2011 until his recent appointment. In 2009, Srey also contributed his knowledge through his service as vice dean of Preah Sihanouk Buddhist University. Throughout his career he has worked closely with all religious units in the Kampong Cham province including Buddhists, Christians, Muslims, and others. He has received numerous medals including two gold medals from the Prime Minister of Cambodia and various classes from the Royal Order of Monisaraphon, which is a medal presented by royal decree of the King for services in the fields of literature and the fine arts, education, justice, administration, and science. Sopheak received the Commander (2014), Grand Officer (2015), and Officer (2017) awards, and received the highest Grand Cross from the King in May 2022. He obtained his master’s degree in business and administration from the Cambodian University of Specialties in 2007 and is currently pursuing a doctor of philosophy in public administration at the Royal Academy of Cambodia. He also holds a bachelor’s degree in accounting.