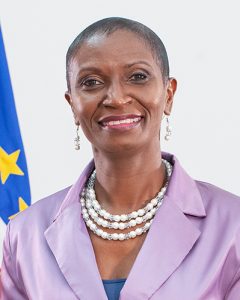 Minister for the Presidency of the Council of Ministers and Parliamentary Affairs
Filomena Mendes Gonçalves graduated in law (JD) and is a member of the Cape Verde Bar Association. She was secretary in the Secretariat of State for Fisheries and of the Minister of the Sea. As a jurist, she participated in several studies and opinions in the areas of municipal law, banking law, commercial law, and public works legislation. She was a member of the Political Commission of the Movement for Democracy (MpD) political party, among other party positions. She was also a deputy of the nation, having participated in several specialized commissions. She is a member of the Parliamentary Women’s Network of Parliamentarians of the Economic Community of West African States (ECOWAS—or CEDEAO in French) and is chair of the Parliamentary Network of Parliamentarians of CEDEAO Against Illegal Migration and Youth Promotion. She has also participated in election observation missions in African countries.