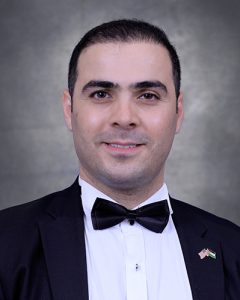 Judge
Judge Eyad A. Alsamhan is one of the youngest judges in the history of Jordan. Born in Blue City [Zarqa], Jordan, he was inspired by his father’s and mother’s roles in reshaping the legislative scene in Jordan. From their influences, he took an interest in law at an early age and later specialized in general civil jurisdiction. He also has experience deciding and mediating complex, high-stakes cases. In addition to his expertise in law, Alsamhan generates artificial intelligence with applications in judiciary settings. He was sponsored by the Jordanian Royal Majesty in a program to qualify judges from the bachelor’s level (the Future Judges program). During his first master’s degree in Intellectual property law at University of Jordan, he received a student exchange grant from the European Union to study at Adam Mickiewicz University in Poland. Alsamhan is fluent in many languages including Arabic, English, French, with high proficiency in Japanese and Polish and has participated in international conferences in Jordan, Turkey, London, Germany, Poland, Hungary, and the Maldives. He has international experience researching and applying cutting-edge issues in rule of law, which he has published in 13 articles, found in a number of scientific journals. He also contributed a textbook chapter in constitutional law and has written a book relating to judiciary ethics. The young judge had the opportunity to exchange legal experiences with international organizations, the most recent of which was the Max Planck Foundation for International Peace and the Rule of Law. Finally, the Jordanian Judicial Council hired Judge Alsamhan to contribute to the justice facility’s service in the Hashemite Kingdom of Jordan in response to the royal directives in supplying the justice facility with scientifically and practically qualified judges at their highest levels. Currently, Alsamhan is an LLM student at Brigham Young University in the United States.