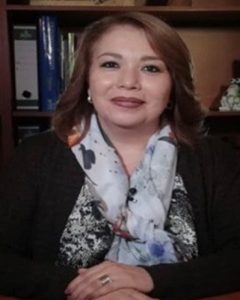 President, Guatemalan Media Chamber
Elsie Jannette Sierra Belches received her degree in social communications and was a cum laude graduate from Francisco Marroquín University. She received her master’s degree in international relations from Galileo University. She received her doctorate in law at the University of San Carlos in Guatemala. Sierra has been a professor for more than 23 years and has taught communication, journalism, sociology, and international law. She is currently the dean of communication sciences and the academic director of Mentek at the University of Guatemala. She has held a variety of positions during her career including president of the Guatemalan Chamber of Journalism; founder and first president of the Association for Gender Equity of the electricity subsector of the Central American Isthmus, ASEGICA; and creator, producer, and director of the television news program Telecentro Trece and the well-known programs El Cafecito and Entre Nosotras. Sierra has always shown a fervent interest in the problems of women, children, older adults, and people with disabilities, and she actively participates in organizations to support these sectors. She has received many awards and recognitions such as ambassador of peace from the Association of Hondurans in Guatemala and the medal for teaching excellence by the Academy of Criminal Sciences and Human Rights of Guatemala.