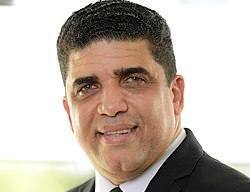 Dioris Anselmo Astacio Pacheco, also known as Dío Astacio, is a Christian pastor, communicator and Dominican lawyer, and an author of books and motivational conferences. He participated in the May 2016 elections as a candidate for mayor for the municipality of Santo Domingo Este .

His professional life is closely linked to the religious, business and political areas. He is the founder of two Christian congregations, one of them belonging to the Christian and Missionary Alliance. He started as a life insurance salesman in the 1990s, climbing over the years to managerial, business leadership, and executive vice president positions in insurance companies, commercial banking, and telecommunications. In 2001 he dedicated himself to developing a record promotion work under the label “Maná Music Group” with the aim of promoting young people in the Christian musical field.

In 2008 he released his first book entitled Integral Success, Ten Hidden Laws with which he also developed the National Day of Integral Success Leadership for public school students and the campaign “The value is in you” at the national level with the Dominican Navy. He has written seven books in English and Spanish. He has also been an announcer and producer of radio programs.