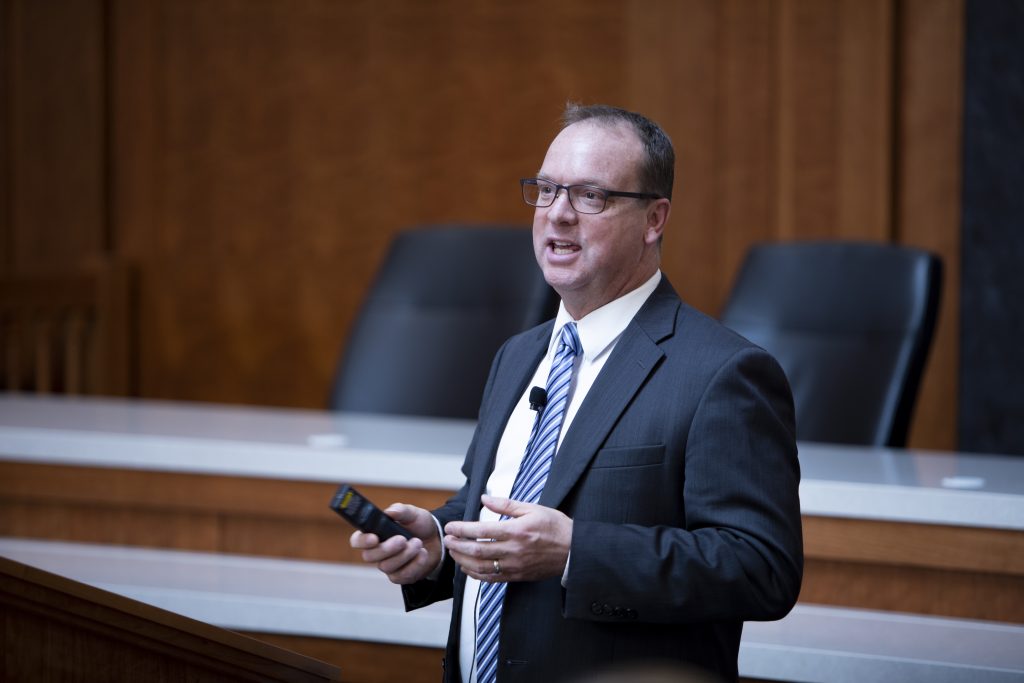 The following is a summary of David Moore’s investiture ceremony held on 11 January 2022 at which he was appointed to the Sterling and Eleanor Colton Endowed Chair in Law and Religion.

David H. Moore, ICLRS Associate Director, shared six principles that have been meaningful to him in his life and in the law after being formally endowed with the Sterling and Eleanor Colton Chair of Law and Religion.

The first principle Professor Moore spoke about was emulation, saying that he has been blessed to be surrounded by people he could emulate and learn from. He named people such as Justice Alito, Eleanor and Sterling Colton, colleagues, as well as his Savior, Jesus Christ. When Professor Moore visited the Supreme Court Building with his family one Christmas, Justice Alito himself gave the Moore family a tour. “That sort of humility, even in positions of influence and prominence, has been influential to me,” he said.

The second principle revolved around the idea of doors and windows. “We often hear the phrase, ‘when God closes a door, he opens a window,’ and that has been my experience,” said Professor Moore. While still in law school, he was disappointed to not receive a return offer from a firm after a summer internship. That disappointment led him to Washington D.C. and to pursue a clerkship at the justice department. Similar experiences have taught him that God can make a lot more out of people’s lives than they can alone.

Third, Professor Moore spoke of the impact of individuals rights on his life and on his law career. He has a passion for separation of powers and has come to see the importance of process in vindicating substantive rights. 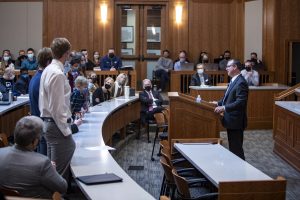 Fourth, he spoke of the value of priorities, especially family. “I go to work to make a living and I come home to make a life,” he said. Professor Moore went on to explain that putting family first does not mean you should stop working hard to avoid demanding opportunities in your career. Having priorities means that you are able to recognize which things are most important.

Lastly, Professor Moore talked about the role of learning and helping others. “Learning requires more than just study,” he said. To truly learn, you must be diligent and obedient. He also said recognizing and focusing on sources of authority is important to learning. Being able to see the needs of others and act is also a valuable principle that Professor Moore has learned during his lifetime.