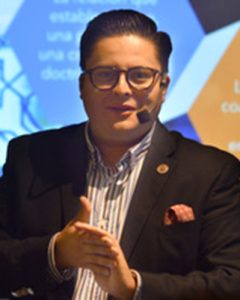 Director General, Conciencia Nacional por la Libertad Religiosa
Cristian Badillo Gutiérrez holds a bachelor’s degree in law and in business administration with emphasis in entrepreneurial and business development. He has a master’s degree in religious freedom and human rights and a doctorate in education. His studies are in human dignity, bioethics, public policy, and new citizenship. Gutiérrez is an entrepreneur in the publishing, automotive, construction, education, and food sectors. He has collaborated with national and international nongovernmental organizations. He is currently director of the National Awareness for Religious Freedom Foundation, an organization dedicated to promoting and defending religious freedom as a fundamental human right in Latin America. Gutiérrez is director of the International Center for Freedom and Religion Studies (CIELRE) and director of the International Observatory on Religious Freedom (OILR). He has given more than 200 seminars, lectures and scholarly presentations in Latin America, the United States, and Europe. His teachings and scholarly interests include religious freedom, conscientious objection, freedom of speech, human rights, and legislation and public policies.