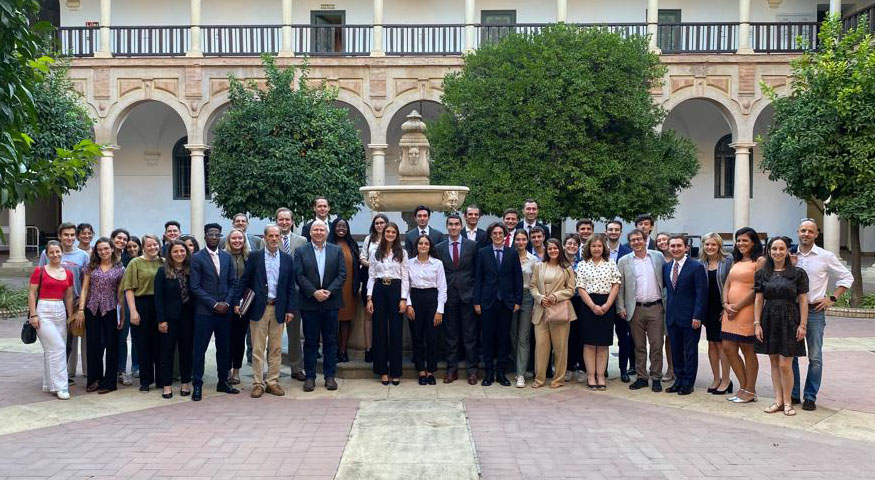 Two other BYU teams also participated in the competition, which was sponsored by the International Center for Law and Religion Studies: Camille Anjewierden, Juliette Green, Anna Hubbard, and Allie King; and Andrew Fellows, Ben Johnston, Dailyah Rudek, and Jorden Truman.

Competition organizing committee member Professor Andrea Pin (University of Padua, Italy) explained that this year’s case promoted “students’ reflection on the fact that ensuring security, fostering digital development, and respecting freedom of religion or belief are not trade-offs but are all equally important, both from a legal and human perspective.”

Johns noted, “It was meaningful to contemplate the nuances of religious freedom in the law and how difficult questions of balancing other constitutional rights may come into play.”

Moot court is something that initially felt very daunting and out of my comfort zone, but this experience taught me a lot about myself and my own capabilities. I learned so much while preparing for oral arguments but also at the competition, listening to the other teams’ arguments and the judges’ questions. Most of all I loved being able to connect with students from all over and getting to spend time with my teammates in such a beautiful city! I’m so grateful for the Center in providing such an incredible and memorable opportunity.
—Elyse Slabaugh

For Green, researching, writing, and arguing the brief was an invaluable experience: “In the process, I learned a lot about public accommodation, discrimination based on religion, and the First Amendment [of the U.S. Constitution]. The experience encouraged me to take advantage of more opportunities to write and argue in different contexts.”

Competition judges commended all of the teams on their briefs and oral arguments—and on the extremely close competition. Organizing committee member Dr. Tania Pagotto (University of Milan–Bicocca) praised BYU students for “distinguishing themselves in the written briefs, by demonstrating a deep level of preparation and legal analysis, and during oral pleadings, by showing a creative mindset and responsiveness to the Justices’ questions.”

The competition was not without its challenges for BYU: COVID necessitated that Green serve as a last-minute-substitute oralist for her team. And eleventh-hour flight cancellations and customs issues led Andrus, Green, Johns, and Slabaugh to be stranded in Paris. They wended their way through airports in Paris, Zurich, and Amsterdam before landing in Madrid and racing (within the legal speed limit) 250 miles to Córdoba in a rental car—arriving at the competition site mere moments before Slabaugh and Green were scheduled to present oral arguments. Their tenacity paid off when Green performed admirably, under tough questioning by the judges, and Slabaugh’s and Johns’s team earned top honors.

BYU’s students were grateful for the opportunity to interact with and befriend students from different countries, and they unanimously praised the experience as enriching educationally, professionally, personally, and culturally. Anjewierden stated, “I was so impressed with the Italian and Spanish students! It was amazing to meet them and see how well they did arguing in a foreign language and under U.S. law.” 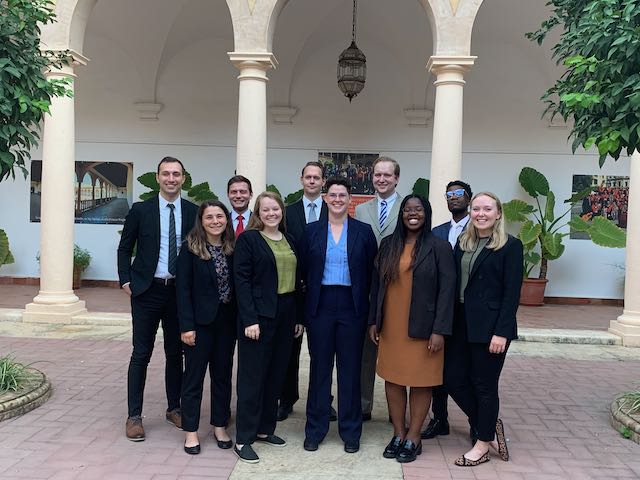 Johns described the competition as “an incredible experience that not only provided us the opportunity to sharpen our legal skills but also allowed us to make lasting connections with friends from across the globe. It was comforting to see the passion of diverse students and professors toward the topic of religious freedom—that we are not alone in the sacred mission of protecting freedom of religion or belief.”

Conference organizers expressed gratitude to the ICLRS for its continued sponsorship of the competition. Pin praised the ICLRS for being “as generous in founding the competition as it has been effective as a partner. The International Moot Court in Law and Religion has hugely benefited from the Center’s network of scholars and judges, the wisdom of its leadership, and the community of people with whom the program has shared every step. In a nutshell, this program wouldn’t have survived the test of time without the ICLRS.”

The 2022 event was the sixth International Moot Court in Law and Religion, following a two-year suspension due to the pandemic. It was the first to be held outside of Italy and served as a precursor to the International Consortium for Law and Religion Studies (ICLARS) conference held in Córdoba, 19–21 September.

Pagotto, who participated in the inaugural moot court competition as a law student in 2015, explained the impact the program has had on her career and its potential impact on others: “Thanks to the International Moot Court, I decided to continue with academia and conduct my research in law and religion issues, so I am very fond of the program. Today, I still see the competition as a learning experience because students are able to rethink and shake some small certainties that they may have reached as an academic.”