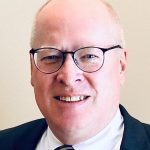 Jim Blood worked as an attorney in the San Francisco Bay Area for 28 years before moving to Utah. He was an attorney at the Federal Home Loan Bank of San Francisco and at Carr, McClellan, Ingersoll, Thompson & Horn. Jim was also Senior Vice President and General Counsel for FP International. He is curently an individual investor in public stocks. He received a BA in Economics from BYU, an MA in International Affairs and JD from George Washington University.

Sharman Blood recently worked as for the International Center for Law and Religion Studies as a Conference Liaison, assisting in coordinating and organizing conferences for the Center. She previously owned her own bookkeeping business in the San Francisco Bay Area. Sharman earned an MA in Education from Stanford University, and taught high school English and Social Studies to at-risk students. She also worked for the Office of Public Liaison at the White House and as a research assistant for a policy research group in Washington, D.C. She graduated from BYU, where she received her BA in History. Prior to moving to Utah in 2015, she and Jim served as Public Affairs Directors for the San Francisco Stake. Sharman and Jim recently served a mission for The Church of Jesus Christ of Latter-day Saints in Russia.  They are the parents of four children.