Senator Smith was elected as a Republican to the United States Senate in 1996. He served from January 1997 to January 2009, and was chair of the Special 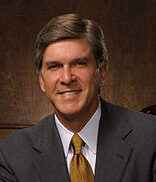