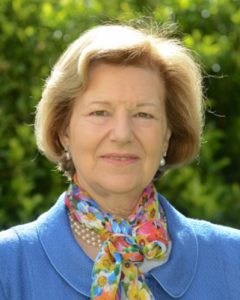 Chair, AMAR International Charitable Foundation
Baroness Emma Nicholson is founder and chairman of AMAR International Charitable Foundation. She started AMAR in 1991 in response to Saddam Hussein’s systematic persecution and extermination of the Marsh Arabs, and the foundation has now grown to become one of the leading charities in the Middle East. Nicholson is a member of Britain’s upper chamber of Parliament, the House of Lords, and has recently been appointed as chairman of the House of Lords Sexual Violence in Conflict Committee. She chairs the All-Party Parliamentary Group on Foreign Affairs and was a member of the influential ad hoc Soft Power Committee. She has taken part in many election observer missions to countries such as Pakistan, Afghanistan, Lebanon, Iraq, Russia, Moldova, Kenya, and Zambia, and was chief international observer twice in Yemen and Armenia. She was a member of the European Parliament for ten years and served as vice president of the European Parliament’s Committee on Foreign Affairs, Human Rights, Common Defense, and Security Policy. She also served as a rapporteur for Iraq, Kashmir, and Romania. She continues to serve on the Parliamentary Assembly of the Council of Europe and is the former chairman of the Interparliamentary Standing Delegation between the European Parliament and Iraq. Nicholson began her political life as a member of the Parliament in Britain in 1987, serving a constituency in southwest England for 10 years. She previously worked as a director of Save the Children after starting her career as a computer software developer and engineer. Away from work, her great love is music. She trained at Britain’s Royal Academy of Music.