Austin Atkinson (BYU Law ‘20) first caught an up-close glimpse of religious freedom issues while living in the Baltics as a missionary for The Church of Jesus Christ of Latter-day Saints.

“Initially I got interested in religious freedom when looking at the different social dynamics and religious dynamics that existed in those countries,” he said. “There’s still a lot of remnant animosity between the Russians and the ethnic Latvians and Lithuanians, which is understandable.” 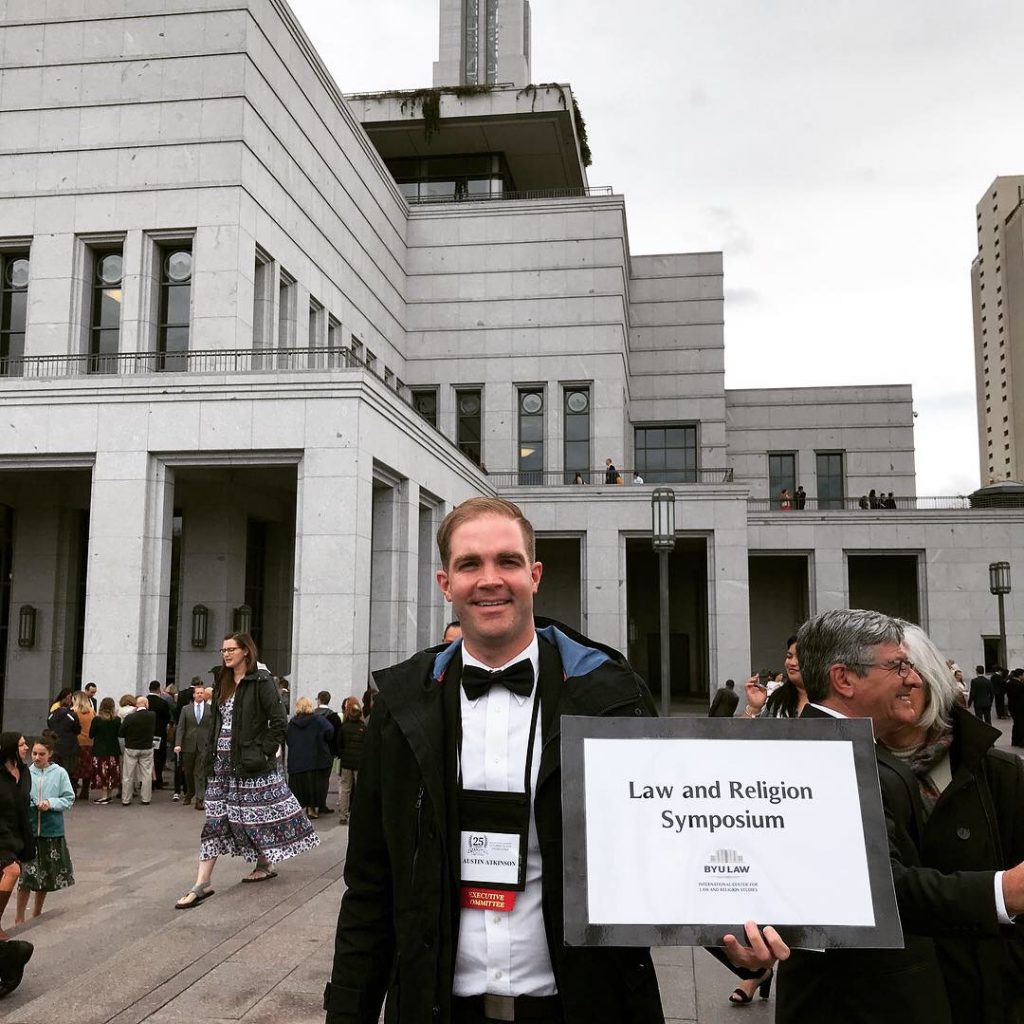 As a volunteer at the annual Law and Religion Symposium, Austin had the opportunity to use his Russian language skills and befriend several delegates from Eastern Europe.

After returning from his missionary service, Austin continued to study Russian while completing his undergrad at BYU, double majoring in Russian and geography. As a first-year law student, he was excited to learn that he could lend his Russian skills as a volunteer at the Center’s annual Law and Religion Symposium. Recognizing that “you don’t get too many opportunities to speak Russian as a law student,” Austin excitedly seized the opportunity.

“[I] really loved the opportunities that I had [at Symposium] that first year,” he said. “I had some Ukrainian delegates and some Russian delegates that I got along really well with. It was a good reminder to me of why I was interested in Russian in the first place, and then religious freedom in general.”

Austin continued to make use of his Russian skills on the Center’s behalf as one of the Center’s Summer Fellows after his first year of law school. Working in Moscow for the Area Legal Counsel of The Church of Jesus Christ of Latter-day Saints, he observed a new angle of Church operations.

“I had seen the way that the ecclesiastical side of the Church functions as a missionary…” he said, “but then was able to see what the legal perspective was.”

Austin’s externship involved researching real estate and zoning laws for Church properties. He also performed research to ensure that the rollout of the BYU Pathway Worldwide program in Eastern Europe would be in harmony with all local laws. “I had only finished one year of law school and thought ‘How much do I really know?’,” he said, “but it was neat to see those research skills actually applied.”

Following his externship in Moscow, Austin continued to stay actively involved with the Center, volunteering at symposiums, serving on the student management board, and traveling to international conferences with the Center. He also competed in the European Academy of Religion International Moot Court Competition in Bologna, Italy.

With so many experiences with the Center, Austin finds picking a favorite difficult. One highlight was attending the 2019 G20 Interfaith Forum in Tokyo, Japan. The forum brings together an international network of religiously affiliated institutions to discuss how they can contribute to global initiatives. The “caliber of people” made an impression on Austin. “They’re really people from all different ethnic backgrounds and cultures,” he said, yet, “[they were] all able to come together and talk about these issues and promote the same values.”

Austin’s extensive involvement with the Center has also allowed him to develop meaningful relationships with several Center faculty. David Colton, the Center’s chair of the International Advisory Committee, has initiated several mentoring conversations with Austin. “I’ve been really appreciative of all that he’s done for me and all the advice he’s given me,” Austin said. 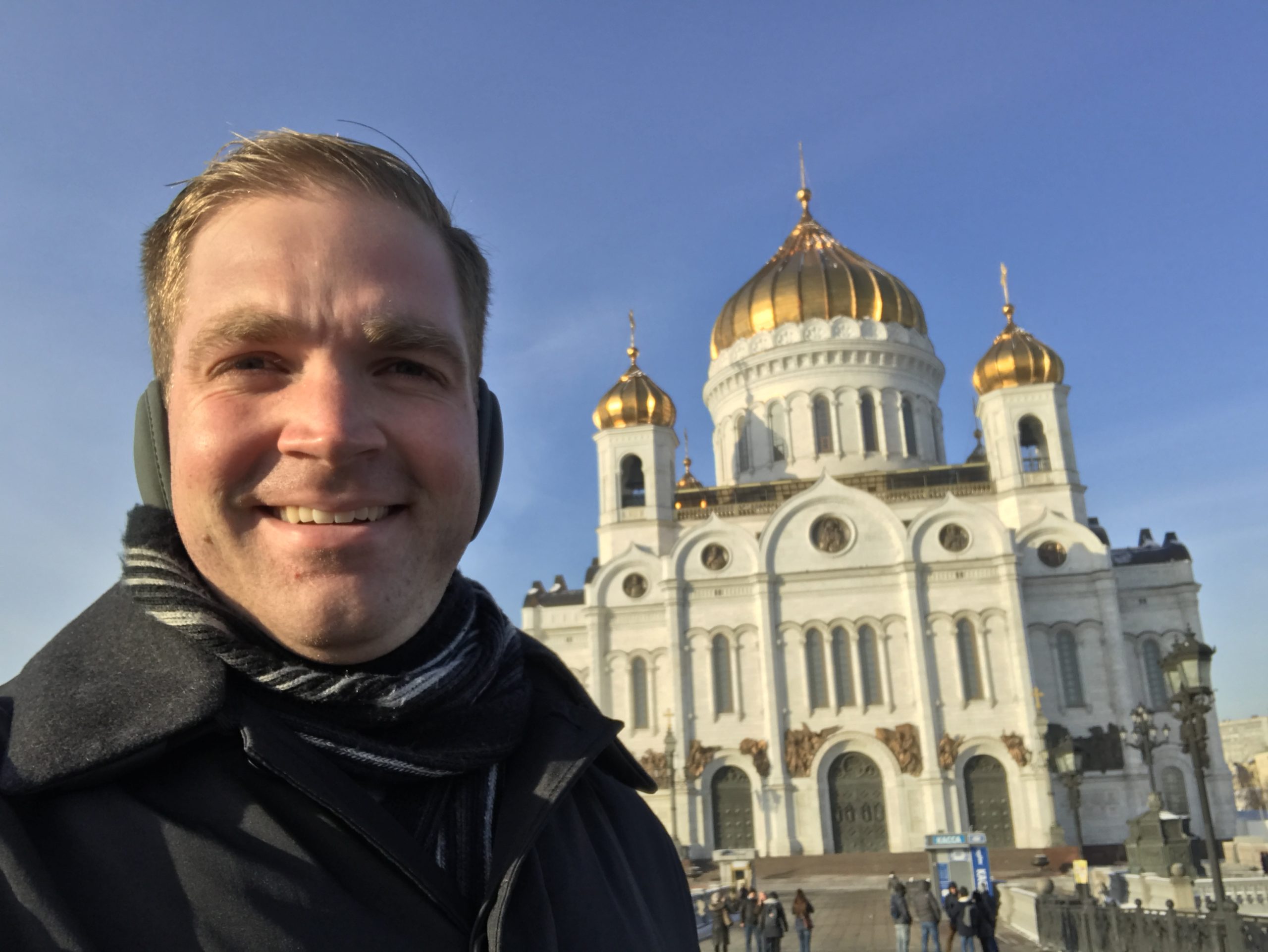 Austin had the opportunity to return to Eastern Europe as an extern in Moscow with the Area Legal Counsel Office of The Church of Jesus Christ of Latter-day Saints.

Because of his familiarity with Eastern Europe and his Russian skills, Austin has also had the opportunity to work with Associate Director Elizabeth Clark, who specializes in Eastern European law and religion issues. Austin says he’s learned from her example of building relationships with people all over the world. “I’ve really learned a lot about how important it is to establish these relationships and continue them going forward.”

Professor Clark is also an inspiration to Austin as someone who has used a law degree to work on religious freedom issues. “I think there’s this understanding that after we graduate from law school, that religious freedom isn’t an area of law that we can necessarily practice because you have to be established; traditionally, you’re an academic and you’re publishing papers and articles,” he said, “but after working for the Center, it’s something that I want to continue doing.”