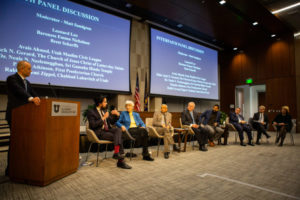 On April 11, 2019, the Hatch Center, —the policy arm of the Orrin G. Hatch Foundation—hosted a religious freedom symposium entitled “Protecting Our Religious Liberty.”

The symposium was attended by leaders of many faiths, including rabbis, pastors, elders, and apostles such as Elder Jeffrey R. Holland and Elder David A. Bednar of the Quorum of the Twelve Apostles of The Church of Jesus Christ of Latter-day Saints.

After the symposium, Senator Hatch and Leonard Leo joined Boyd Matheson, Opinion Editor at Deseret News. Click here to listen. They also discussed Senator Hatch’s op-ed from earlier this week, where he outlines the significant implications of “court-packing.” Click here to read.

The full press release and photos from the event are available on the Hatch foundation’s website. Click here to read. Video remarks from all the speakers, as well as the roundtable, are also available at the same link or via YouTube (linked to the left