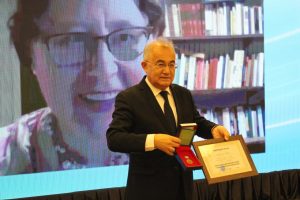 The International Center for Law and Religion Studies is delighted to announce its Associate Director, Elizabeth Clark, has received an award for services for “Protecting Human Rights” from the National Centre of the Republic of Uzbekistan for Human Rights.

According to an official letter, the award was established in 2020 by a Decree of the President of the Republic of Uzbekistan. It recognizes Clark for her services and contributions for advancing legal literacy and making Uzbekistan a “more open and free country for people of all beliefs.”

The Centre thanked Clark for participating as a “part of the leadership team that is actively contributing to reforming [the] legal system” of Uzbekistan.

Professor Clark has consulted on religious freedom initiatives in the country with the United Nations Special Rapporteur on Freedom of Religion or Belief, the U.S. State Department, the U.S. Commission on International Religious Freedom, the Uzbek government, and faith groups. While working with these entities, Clark has been a participant and speaker at Zoom parliamentary hearings, informal consultations with U.S. and foreign governments, and small working group sessions with the UN Special Rapporteur and U.S. government leaders.

Clark’s involvement with Uzbekistan began several years ago, when Clark wrote an analysis of a 2018 draft law. Over the past 20 years, Clark has engaged in similar technical advice and law reform work in over a dozen countries across the world. She calls it a “privilege” to be able to “work with countries that are trying to bring their laws more in harmony with international standards.”

Clark was “surprised and delighted” to have received the honor from the Centre and is “grateful for the wonderful friends [she has] made there, and the people [she has] had the privilege of working with.” Though she is optimistic about the future, Clark sees much work ahead. “We’ll continue to…have discussions about how best to address extremism and still protect freedom of religion.”

Clark has found herself particularly impressed with the Republic of Uzbekistan’s willingness “to engage with outsiders, often governments, when they deal with these concerns…Uzbekistan really has gone above and beyond what I’ve seen any country do in terms of repeated and open dialogue, even with partners who critique existing law.” During the period of COVID restrictions, for example, she has worked with the government of Uzbekistan to have a series of consultations of key government officials with foreign experts on difficult law reform issues in addition to providing written analyses of later drafts of laws. Uzbekistan has also invited comments from the UN Special Rapporteur and the Organization for Security and Co-operation in Europe and has worked with the U.S. State Department and the U.S. Commission on International Religious Freedom.

“I think that is setting the path for a really important engagement that will hopefully continue in the future,” Clark said. “I’m excited that they’ve made progress over the last several years; I think that’s really impressive for a country that’s grappling with a difficult history and trying to liberalize.”