Protecting Religious Freedom and Dignity: The Universal Declaration of Human Rights at 70 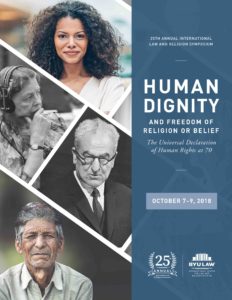 Keynote speaker at the Symposium opening session on Sunday evening, 7 October was Ann Power-Forde, an Irish lawyer and academic who is currently Presiding Judge at the Constitutional Court Chamber of the Kosovo Specialist Chambers (KSC) in The Hague and was formerly judge at the European Court of Human Rights. A keynote address by Sam Brownback, United States Ambassador at Large for International Religious Freedom, was given on Monday 8 October.

To date, more than 1300 delegates from 125 countries have met together in these annual meetings to discuss principles of religious liberty and to explore ways to better implement these principles. This year’s gathering explored the theme “Protecting Religious Freedom and Dignity: The Universal Declaration of Human Rights at 70.” Topics for discussion by delegates will include the history and implementation of the UDHR, human dignity as a central idea of human rights, and the protection of international religious freedom and human dignity by various institutions, among others.

Ann Power-Forde SC is an International Judge, a Senior Counsel, and an Academic. She is currently the Presiding Judge of the Constitutional Court Chamber of the Kosovo Specialist Chambers (KSC) in The Hague. She served as a judge of the European Court of Human Rights — working through French and English — from January 2008 until her final case in July 2015. A Consultant Adviser in International Human Rights Law, Ann joined Doughty Street Chambers in London as an Associate Tenant in September 2015, and she is a member of the Doughty Street International Team. She is Senior Counsel with extensive experience in Medical Law, Public Law and Constitutional Law.

As an academic, Ann has over 20 years’ experience of teaching Philosophy and Jurisprudence. She has published and presented papers on a wide range of topics — including international human rights law, bioethics, and risk management. She is a regular guest speaker at national and international conferences.&nbsp…

Sam Brownback was sworn in as United States Ambassador at Large for International Religious Freedom on February 1, 2018. He served as Governor of Kansas from 2011 to 2018. Previously he served as a U.S. Senator (1996-2011) and a U.S. Representative in the House of Representatives (1995-1996) from Kansas. While a member of the Senate, he worked actively on the issue of religious freedom in multiple countries and was a key sponsor of the International Religious Freedom Act of 1998. He also served as Kansas Secretary of Agriculture (1986-1993) and was a White House Fellow in the Office of the U.S. Trade Representative (1990-1991). Prior to his public service, Ambassador Brownback was a private attorney in Kansas and taught agricultural law at Kansas State University, co-authoring two books on the subject. He earned a B.S. from Kansas State University, and a J.D. from the University of Kansas.