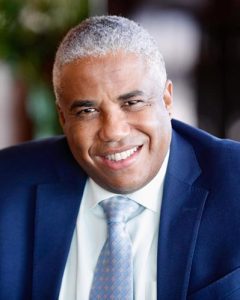 Director, National System of Conflict Resolution, Office of the Attorney General; Legal Advisor to the Dominican Conference of Catholic Bishops
Ángel J. Gomera Peralta served as Deputy of the Republic from 2006 to 2010. He is also a lawyer with a master’s degrees in electoral law from Castilla La Mancha and in political science and public policy from Autonomous University of Santo Domingo. He has diplomas and specializations in political training from Camilo José University Cela in Spain, culture of peace and secondary and tertiary prevention of violence from José Simeón Cañas Central American University in El Salvador, new technologies for access to justice and alternative resolution of judicialized conflicts from Antigua, Guatemala. He is a collaborating columnist for the newspapers El Día and El Nuevo Diario and the Palanca Magazine. He has taught at the Public Ministry School and is currently general director of Environmental Policies (PROEDEMAREN) at the attorney general’s office. Gomera Peralta is a member of the Secretariat of the Cursillos of Christianity and Happy Marriage Movement of the Archdiocese of Santo Domingo, conference of the Dominican Episcopate