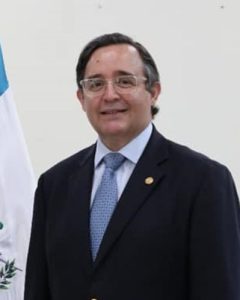 Ambassador of the Republic of Guatemala to the United States
Prior to his appointment as Ambassador of Guatemala to the United States, Alfonso Quiñonez worked for five years as the public affairs manager for a large industrial conglomerate in Guatemala. Prior to that, Quiñonez spent 15 years at the Organization of American States (OAS), where he was director of the Department of Cooperation Policies, executive secretary for the Summit of the Americas and secretary for external relations. Previously he served for five years as the Executive Secretary for Social and Economic Development and Director General of the Inter-American Agency for Cooperation and Development. Earlier in his career, Quiñonez was a member of the Guatemalan Foreign Service, having held served as a counselor in Spain, in the United States as deputy chief of mission, and as Ambassador and Permanent Representative to the Organization of American States until 2000. He has been a member of the board of the US-Guatemala Business Council, the board of advisors of the Inter-American Foundation, and the board of directors of the Pan-American Development Foundation. He has also served on the board of trustees of the United Nations Institute for Training and Research (UNITAR), where he chaired its finance committee, on the advisory board of the master’s program in Integral Economic Development at the Catholic University of America School of Business and Economics, and as a lecturer at the United States Foreign Service Institute on Latin American and Caribbean issues. He was also a professor at the School of Political Studies and International Relations at Francisco Marroquin University in Guatemala. He is married and has two children.