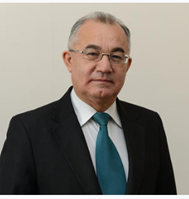 Prof. Akmal Saidov is the Director of the National Human Rights Centre of the Republic of Uzbekistan. He is also the First Deputy Speaker of the Legislative Chamber of the Oliy Majlis (Parliament) of Uzbekistan and a full member of the Academy of Sciences of Uzbekistan. He is currently Vice-President of the Executive Committee and a member of the Sub-Committee on Finance of the Inter-Parliamentary Union, as well as Vice-Chairperson of the OIC Independent Permanent Human Rights Commission. He holds the diplomatic rank of Ambassador Extraordinary and Plenipotentiary with the status of Minister. He graduated from the Tashkent State Law Institute, and received a PhD in Comparative Law from the Institute of State and Law, Moscow. He has over 300 publications and books in the areas of Parliamentary, International, Human Rights, Comparative Law and reports at over 100 international conference, including sessions of the UN Human Rights Council, UN Treaty bodies and the OSCE, the OIC IPHRC. He is married and has two children.