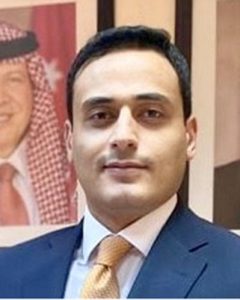 Judge
Abed-Alhaleem Hiasat has served as a judge in Jordan since 2018. He generally works with penal cases and specializes electronic and cybercrimes cases. He studied law at the University of Jordan, graduating in 2008-2012. He worked as a clerk from 2012 until 2014 and graduated from the Judicial Institute in 2017. He is currently pursuing an LLM degree at Brigham Young University in the United States.