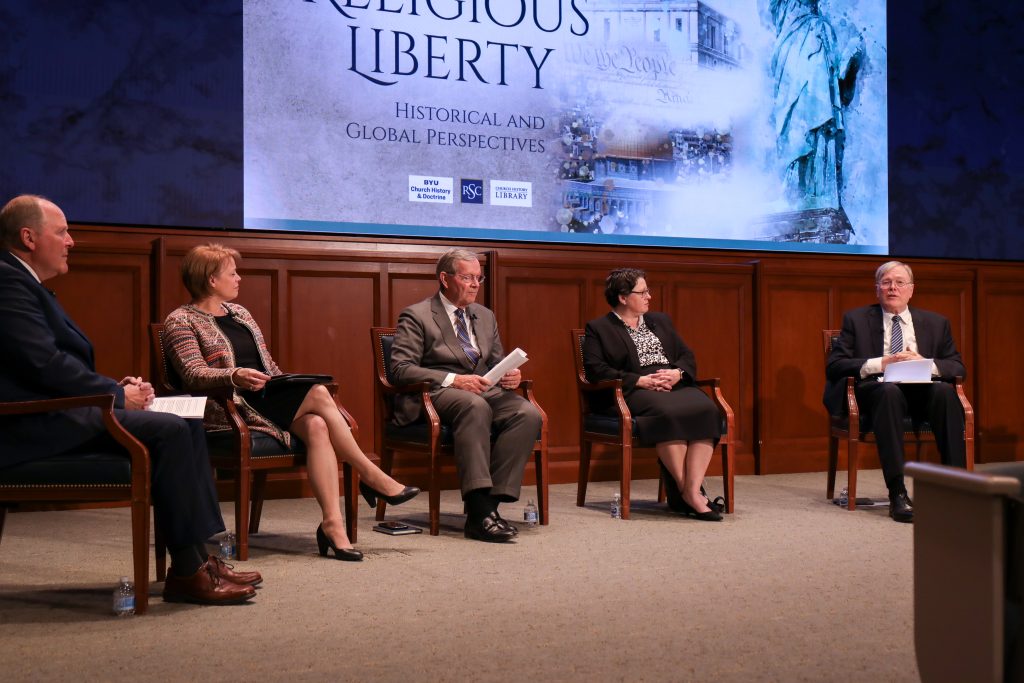 The 2022 Church History Symposium took place March 10-11 in Salt Lake City, UT. This year’s Symposium was notable not only for its powerful line-up of presenters and overall educational merit, but also for its status as the first event of its kind since before the COVID-19 pandemic. Church History Symposia began in 2006 as an initiative of The Church of Jesus Christ of Latter-day Saints to increase awareness of their history as well as generate new insights, and will likely continue for many years to come.

In the Friday session of the Symposium titled “The Journey from Persecution to Inclusion,” Center Director Brett Scharffs addressed the audience regarding the societal path from persecution to inclusion. Scharffs drew a parallel between the persecution embedded in the history of The Church of Jesus Christ of Latter-day Saints and modern-day persecution, such as that which currently pertains to the Yazidi people. Scharffs asserted that in both cases, lives and properties were stolen, false accusations were made, and homes had to be fled. Referencing the matter, he stated:

“One of the most disheartening features of religious persecution is that while we think of it as a distant problem controlled by distant forces, a large part of persecution occurs near at hand, with neighbors persecuting neighbors.”

Scharffs commented on the influential power of government and legislation in such matters, while also emphasizing the virtue of the individual in ending regional persecution. Neighbors can be both a catalyst for persecution as well as part of the solution, according to Scharffs. Efforts that contribute to this goal include showing genuine kindness, increasing personal awareness, and advocating societal and legislative solutions on behalf of the persecuted. Scharffs’ council catered to the general public as well as specifically to these groups:

“It turns out that one of the ways that persecuted groups find their voice is by standing up for others who suffer persecution as well as themselves.”

In a panel discussion later on Friday, former Utah Governor Michael O. Leavitt provided his own insights regarding the influence of marginalized groups, particularly in regards to the defense and expansion of religious freedom:

“What unites us is a sense of our common pain. It is our common interest in being able to defend something that is extraordinarily valuable to us. At the root, it is a common defense of something dear to us.”

This panel focused on Religious Freedom at home and abroad. It consisted of Leavitt, Sharon Eubank of the Relief Society General Presidency of The Church of Jesus Christ of Latter-day Saints, and Center affiliates Elizabeth A. Clark, W. Cole Durham Jr., and Gary B. Doxey. Clark defined religious freedom as “opening a space for everyone to be able to have an identity about their belief in God, or not. This is a privileged right for the Atheist as well as the believer. Without the space to make those choices, you don’t have religious freedom.” Their discussion focused on the expansion of this definition and the means through which religious freedom can be furthered both locally and internationally.

“Religious freedom… is the time-tested value about how you deal with deep differences. It’s more successful than any other social remedy that we know about,” remarked Durham. With this, he exhorted the audience to consider all the benefits of religion to life and well-being in society, particularly in an era where it is frequently associated with problems. Religious freedom also allows for the blessings deriving from interfaith collaborations, as groups are able to bridge the gaps in values and belief systems through respectful conversation.

The panel discussed the continuing and persistent efforts of The Church of Jesus Christ of Latter-day Saints in regards to furthering this basic human right. Eubank stated, “People have inherent rights as children of God, and we will protect them.” Religious institutions can have a considerable influence on the legal aspect of the implementation of religious freedom, but the actual existence of this concept in communities requires the efforts of individuals. Clark declared:

“Together we can make principles stand for everyone. Religious freedom is about the principle. It’s about caring for all people to be able to worship as they choose… We all have parts to play, and we have parts to play together, and those have to be done in a connected way.”

According to Durham, prayer and divine guidance can lead us in terms of how we convey this care and concern for others and their belief systems. “Take advantage of normal connections,” he counseled. The panel strongly encouraged all listeners to respect, care for, and build relationships with others; particularly those of different religious backgrounds.

Those interested in watching the recorded 2022 Church History Symposium may access the various sessions through the following link: