The Center participated in a week of events in Guatamala and Costa Rica, closing with a regional conference in Panama. 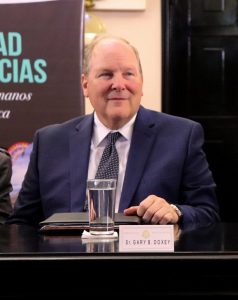 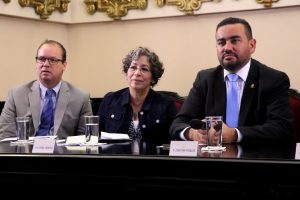 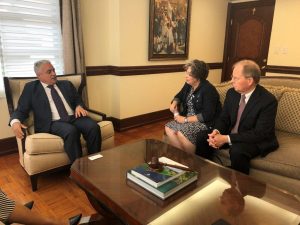 Associate Directors Gary Doxey and David Moore and Senior Fellows Denise and Neil Lindberg took part in a week long religious freedom conference that included events and meetings in Guatemala, Costa Rica, and Panama. The event, co- sponsored by the International Center for Law and Religion Studies, culminated in the signing of an agreement between ICLRS, The Saint Maria La Antigua Catholic University and the Latin American Consortium for Religious Freedom to work together to promote and protect religious freedom.

Events included meetings with various religious leaders, academics, and Supreme Court justices, among others. The delegation spoke at the National Assembly in Costa Rica. Gary Doxey and David Moore were also interviewed on radio and television.

A delegation from The Church of Jesus Christ of Latter-day Saints joined interfaith and government leaders, as well as academics, in Central America in late October to make history. The group signed an agreement to work more diligently together to promote and protect religious freedom.

Denise Lindberg, senior judge of the U.S. District Court in Utah, and David Moore, associate director of BYU’s International Center for Law and Religion Studies, traveled with Doxey to the conference. At a devotional broadcast, the trio also spoke to Church members across the region. They were joined by Elder Alan R. Walker of the Central America Area Presidency, who encouraged civility while defending religious freedom.

“When you see storm clouds on the horizon, you know that a storm is on the way, and you need to prepare to protect yourself,” said conference participant Gary Doxey, associate director for the International Center for Law and Religion Studies at Brigham Young University (BYU).

“With rising militant secularism and a decrease in religion generally, there is a critical need to put in place — working together — rules and statutes that protect the freedom of religion and belief space for believer and the non-believer alike,” Doxey continued.

The weeklong religious freedom conference included a series of events and meetings in Guatemala, Costa Rica and Panama.

“In recent times, 71% of the government[s] of Latin American countries have increased restriction on religious freedom,” added Doxey.

The conference attracted former heads of state, members of congress, Catholic archbishops and other clergy, human rights directors, heads of universities, chief justices and pro-family associations to learn and discuss next steps in preserving religious freedom.

During the nationally televised conference, presentations were made to a packed Costa Rica parliament. The conference concluded with the signing of an agreement among the BYU J. Reuben Clark Law School, the Saint Maria La Antigua Catholic University and the Latin American Consortium for Religious Freedom to work together in the future.

“Be respectful of the law, be kind citizens and follow the teachings of Jesus Christ — always being firm in your beliefs,” Walker said. “But be loving of all others and respect freedom of religion and belief.”